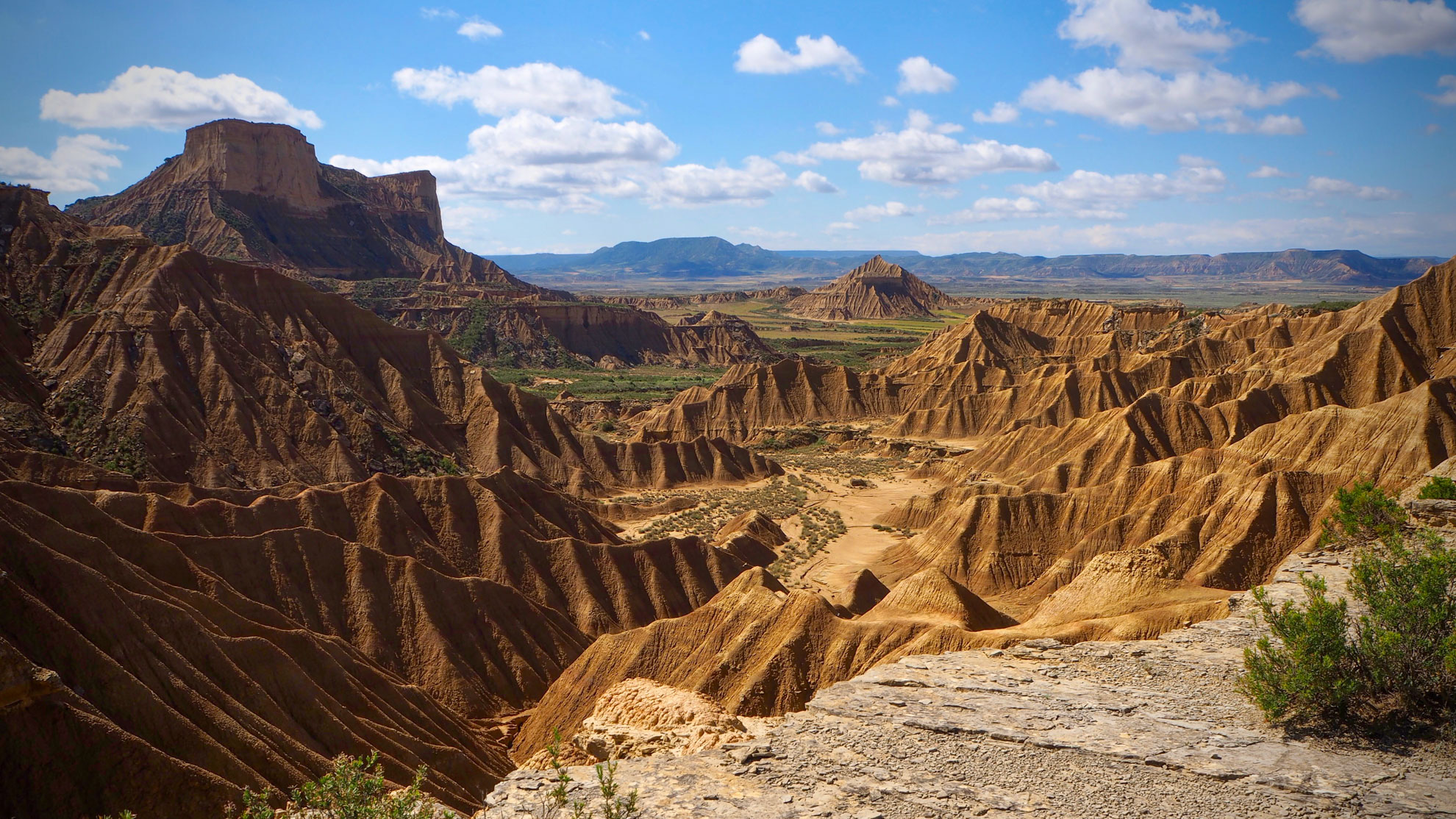 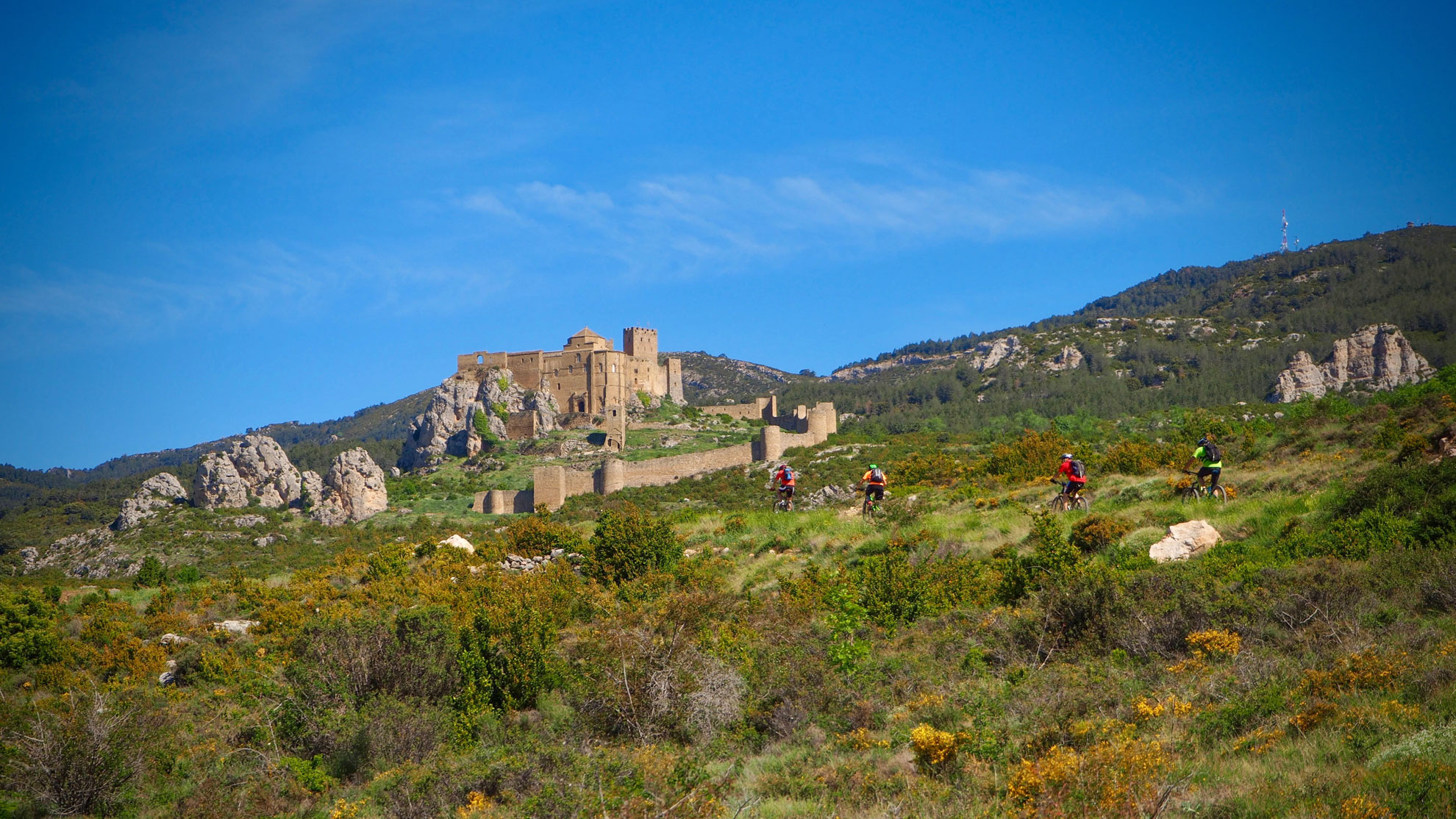 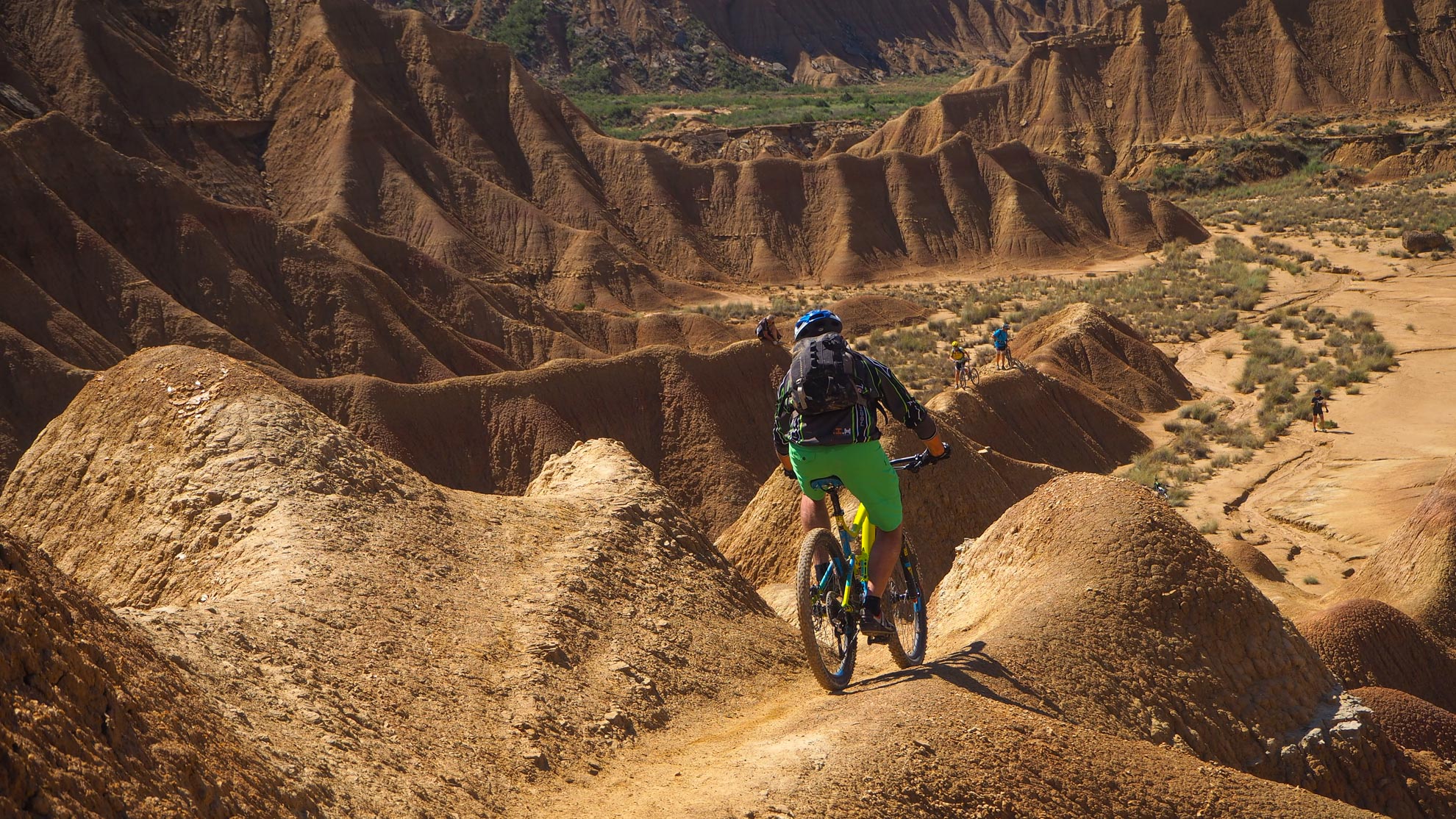 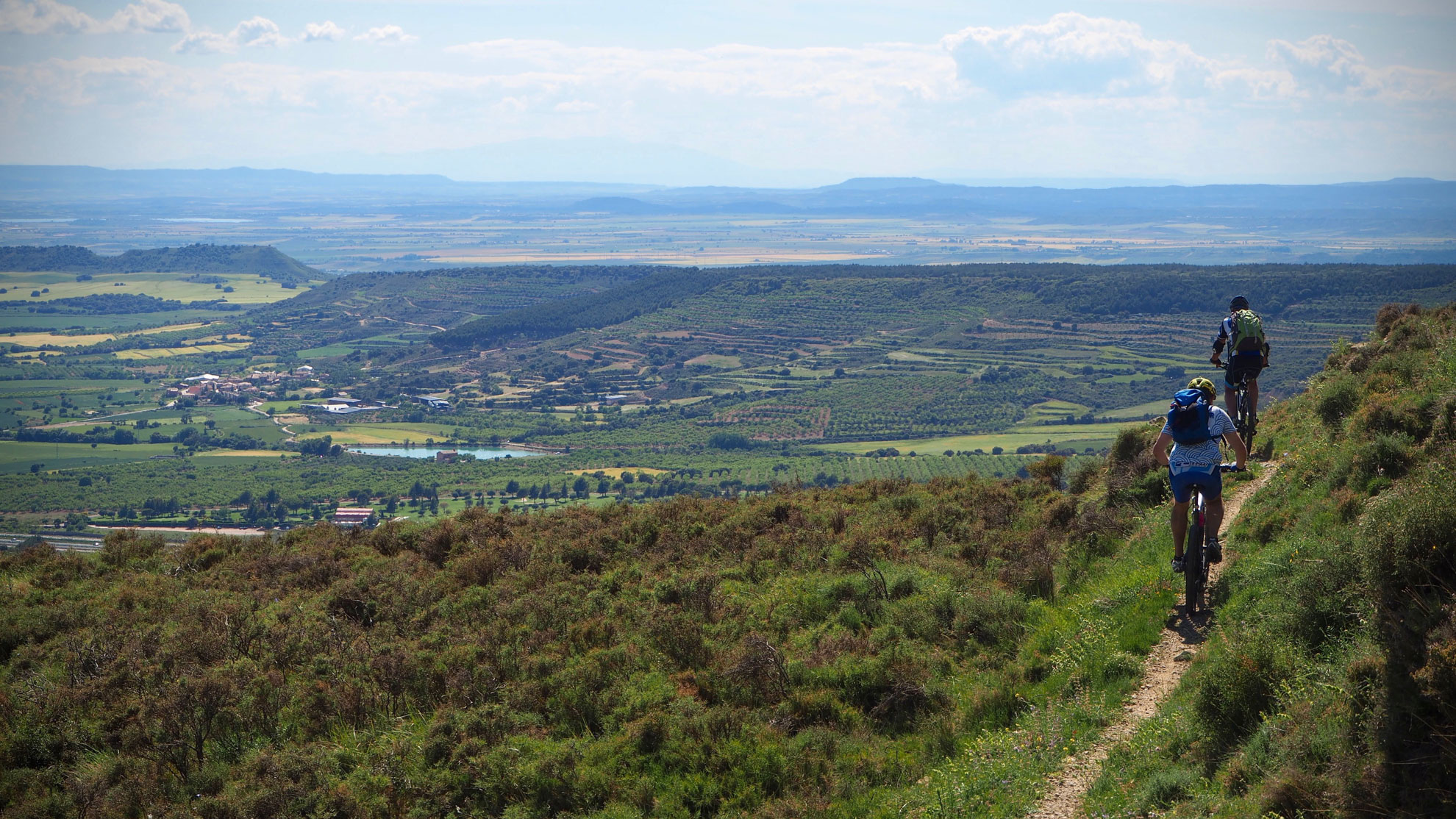 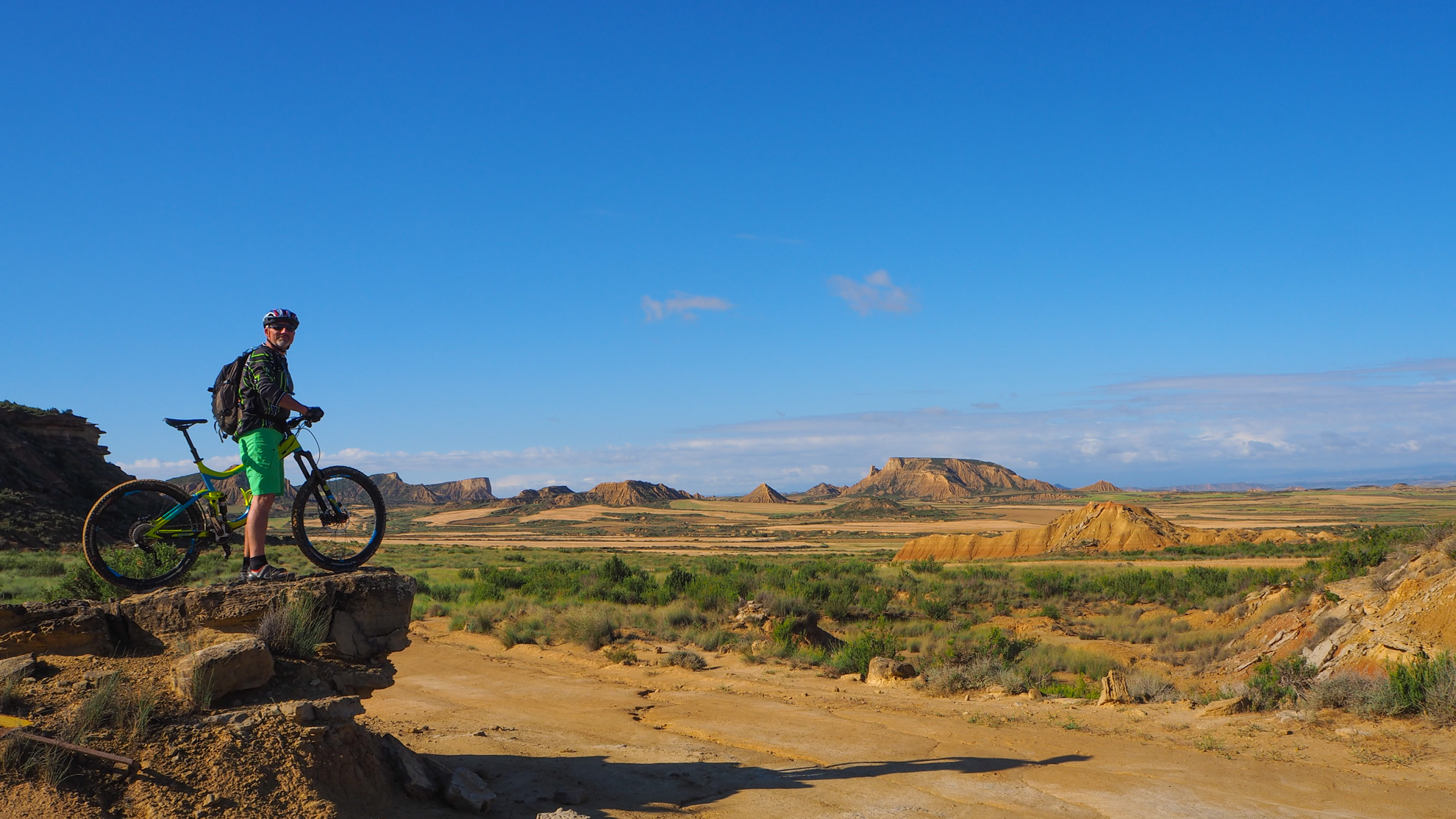 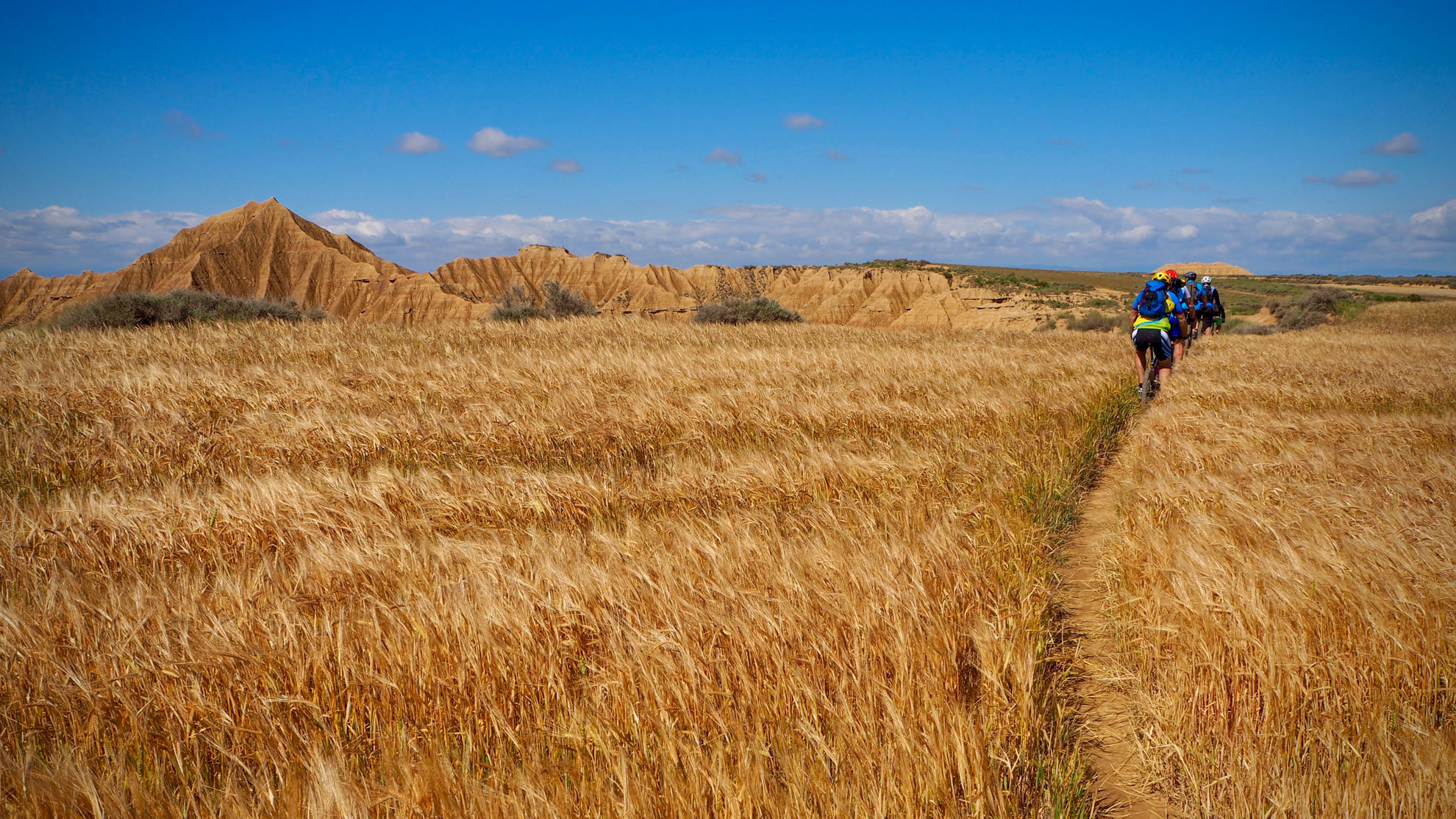 Just on the other side of the Pyrenees, one of our most beautiful tours abroad is hidden... An itinerary as sumptuous as it is varied: Crossing from east to west of the famous Sierra de Guara, with its deep canyons, its superb abandoned villages and its landscapes of moors and thorny forests; Crossing the backbones of the Sierra de Gratal, Cabaliera and Santo Domingo, passing at the foot of the "Mallos" of Riglos and Agüero, impressive rocky spires where countless birds of prey swirl... Passage to the castles of Loarre and Marcuello; North-south crossing of one of the European meccas of MTB : the Bardenas Desert. A climactic end in a western setting where the wonders of erosion and "ghost" villages mingle... Vamos amigos !

Guided version: from 1045€ - DetailsSelf-guided version: from 770€ - Details Duration : 8 days | Level : Customer satisfaction : - 1 reviews
+33 458 140 435 A dedicated team of travel specialists is available to offer you expert advice Monday to Friday from 9 to 12:30 AM and 13:30 to 6 PM (French time) on the phone, or by email.
Bookthis tour
In the event that there are official travel or mobility restrictions in France or in your country of origin at the booked tour dates (official travel warning, quarantine upon return, closed borders) which make it impossible for you to undertake the trip, we offer to defer your booking to a later date at no extra charge. If no suitable date can be found, we offer a full reimbursement.
Print
Share
Share on Twitter
Share on Facebook
Share on Google+
Share by email
Physical level :   Technical level :
This tour is E-MTB compatible

Itinerary start: Rendezvous with the organization team is on day 1 at 6pm in Boltana (next to Ainsa).

Meeting point at the Boltana campsite. Settling in mobile homes (bungalows) and dinner all together at the restaurant. Presentation of the tour and the next day's stage.

A short warm-up on a small tarmac road, before entering the bucolic valley of the Rio Sieste. We ride along the Rio for a few kilometres, before crossing it to start our climb to the Sierra de Guara plateau. As we gain height, the view gradually opens up to the peaks of the Pyrenees. We are indeed just south of the Ordesa National Park and the Mont Perdu. After 400 metres of ascent, we reach the first stone village of the Sierra de Guara plateau. Throughout our east-west crossing, these magnificent villages will follow one another, sometimes still inhabited, often abandoned. The soul of these old shepherds' houses still seems to be present...
By little tracks, we cross the plateau due west in a landscape alternating moors, thorny forests, rivers, stone villages...
We reach the village of Nocito, nestled at the confluence of several valleys. A heavenly place... Night in a gite.

We leave our idyllic valley over a small pass that allows us to "dive" into the lake of Belsué. A very rolling descent over a Rio set in a deep canyon, before opening up into the open valley of Lake Belsué. Superb single track along the lake. On small technical trails we now descend towards the Mallos de Pena Sen and Pena Men. The "Mallos" are huge rock faces in the shape of a club. Countless birds of prey circle around them in an incessant ballet...
We walk along these cliffs in the direction of Nueno. The scenery changes: we are now at the foot of the Sierra Caballera, in a region of hills dotted with orchards, almond fields and various crops. We reach the medieval village of Bolea with its authentic Spanish atmosphere. Overnight stay in a lodge.
Buenas noches y hasta manana amigos!

We regain altitude heading for the magnificent and famous castle of Loarre. A beautiful castle located on a rocky promontory which offers us a beautiful view of the plain.
We then leave for one of the highlights of this trip: the Mallos de Riglos. Just after passing the ruins of the castle of Marcuello, still proudly erected on the edge of the cliff, arrival overlooking this remarkable natural site. We go to the "mirador of the griffon vultures", for a bird's eye view of the village of Riglos and its rocky monoliths reaching more than 300 meters in height. Above our heads, dozens and dozens of birds of prey circle around... Impressive.
Technical single-track descent in gorges dominated by huge ocher cliffs. Many raptor nests. We emerge into the narrow streets of the village of Riglos. You have to twist your neck to see the top of these vertical needles of conglomerate. We leave with a fabulous single dominating the Rio de Gallego and its turquoise blue. Night in a gite at Murillo de Gallego, almost at the foot of the Mallos de Riglos... What a setting!

A short unavoidable stretch of road brings us to the village of Agüero. Other "Mallos" are revealed: the Mallos of Agüero. We leave the Mallos sector to attack the Sierra de Santo Domingo. This long ridge, reaching 1517 meters above sea level, stretches for about 50 kilometers from east to west, separating the valleys of Jaca and Zaragoza. A track in balcony allows you to follow it while being almost at its summit, offering panoramas as far as the eye can see on the plain of Zaragoza and... the Bardenas which are beginning to point their noses! We therefore gain altitude to reach this balcony track, crossing new stone villages lost in the middle of nowhere.
At the end of the day, we join the valley of Pigalo by a descent on very rolling track. If the weather is good, stop and swim in a superb basin with turquoise waters. End of the rolling route to the village of Luesia, dominated by the ruins of its castle. Overnight in small apartments.

We climb back up the flanks of the Sierra de Santo Domingo to enjoy the last views. Impressive and innumerable wind turbines spin their propellers on top of all the mountains that we see in the distance. The shadow of Don Quixote fighting against the mills still hovers... We bid farewell to the Sierra de Santo Domingo as we descend to the village of Castilliscar via a ridge route. Total change of scenery: we are now in the transient plain which separates the Sierras from the Bardenas. Crossing the plain to reach the surroundings of Carcastillo, for a night in an inn.

After passing through Carcastillo and its old Basque pelota pediment, immersion in the atmosphere of the Bardenas with its eroded sedimentary formations and abandoned corrals. The Bardenas are one of the two main “deserts” of the Pyrenees. “Desert” without a doubt since we simply reach the figure of 0 inhabitants per square kilometer! Less "desert" if we look at the level of vegetation, because even if the land is often bare, we still find trees, bushes and even cereal crops...
The only downside to the Bardenas is the presence of a “military polygon” located right in the center of this natural park. You have to know how to ignore the noise of military planes flying over the region (irregularly and unpredictably). Vultures have even learned to live with it...
Crossing the Bardenas to the south, discovery of the “Bardena Blanca”, one of the “musts” of these western landscapes: entry into the Rallôn valley, climb to the top of the Rallôn tabular plateau, “mythical” descent to the foot of the walls of the Pisquera, single-track for kilometers at the bottom of the magnificent Barranco Grande (barranco=gorge, canyon). The Bardena Blanca is also called “Badlands” because of its resemblance to Dakota in the United States.
An unforgettable day in the life of a mountain biker!... Night at the same accommodation as the day before.

And we dive back into the Far-West decor of the Bardenas. Passage at the foot of Castildetierra, the “Castle of Earth” and its tower pointing towards the sky. Many abandoned corrals testify to the intense pastoral life that reigned here a few decades ago... We still come across many shepherds with their flock of sheep. We approach the eroded promontories of the Balcony of Pilatos and the Rincon del Bu, to slip into a valley worthy of the United States. New single track at the bottom of a barranco, a short carry and presto, all you have to do is turn around to enjoy the show...
Last point of view on these magnificent landscapes of the Bardenas, before reaching our picnic point and meeting with the bus which will take us back to the starting point (Ainsa).
In the early afternoon, transfer to Ainsa (approx. 3h). Separation at Ainsa around 5 p.m. (continuation to Lanemezan for those coming by train).

Itinerary end: Separation at the end of the tour is in Ainsa at 4-5pm. On request we can book the following nights accommodation for you in Ainsa.

Distances and altitude gain are an indication only and may vary.

5/5 - 1 Reviews
Bruno V. | Participant rating:
"Accommodation, meals, route, everything was very good. One of our best trips with France Bike Trip.
Our guide was very nice and very competent.
We will be back.