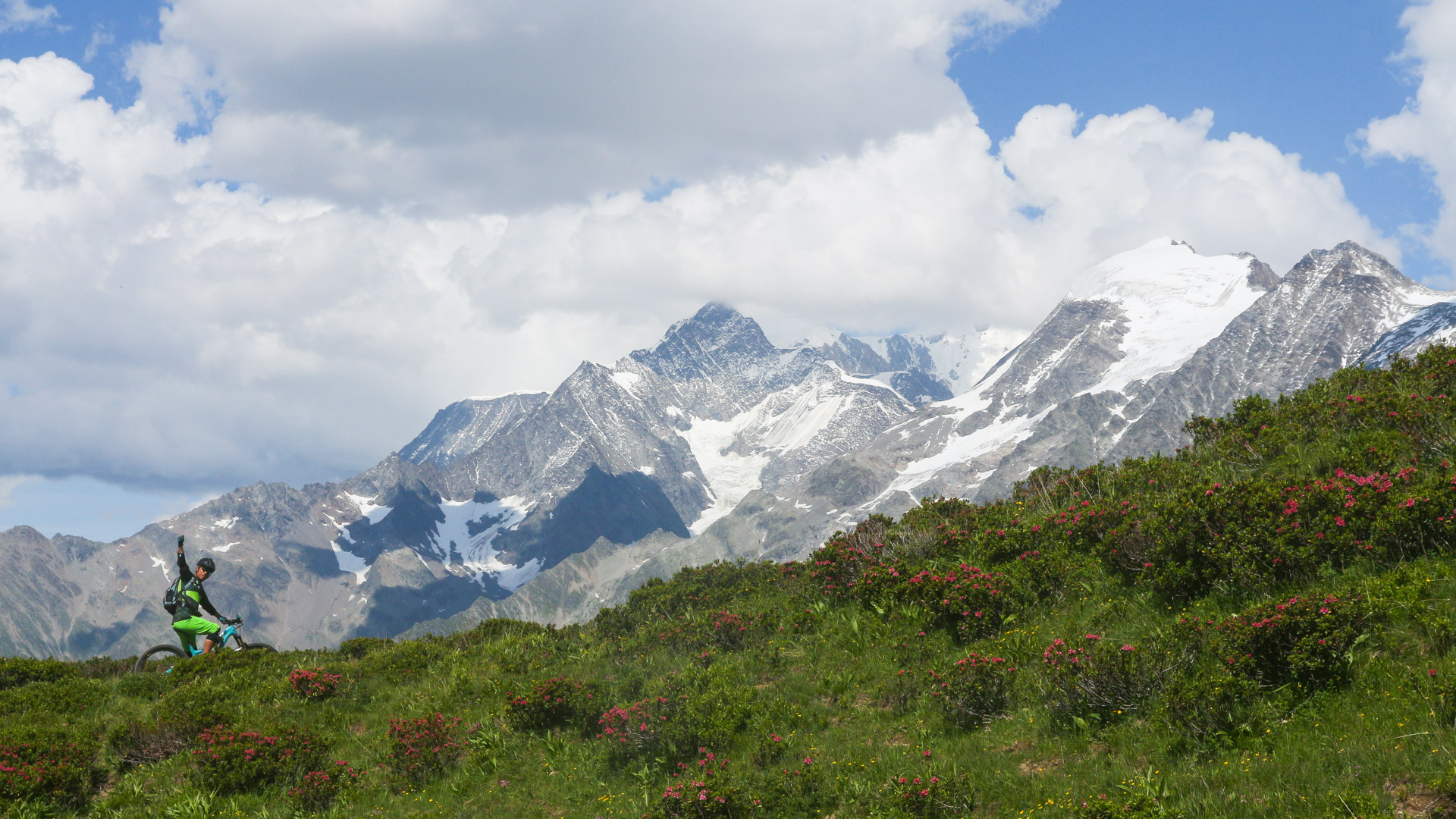 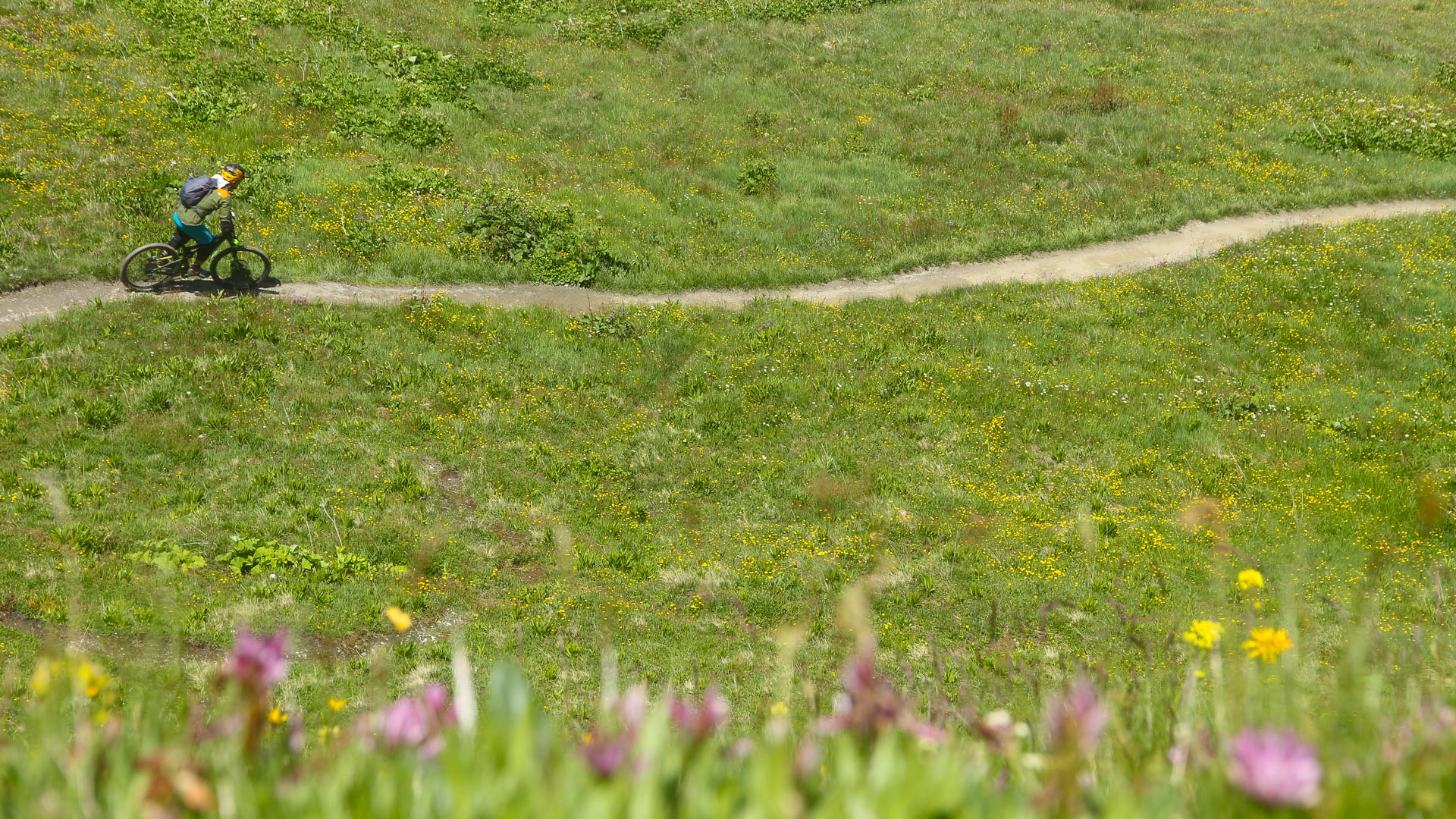 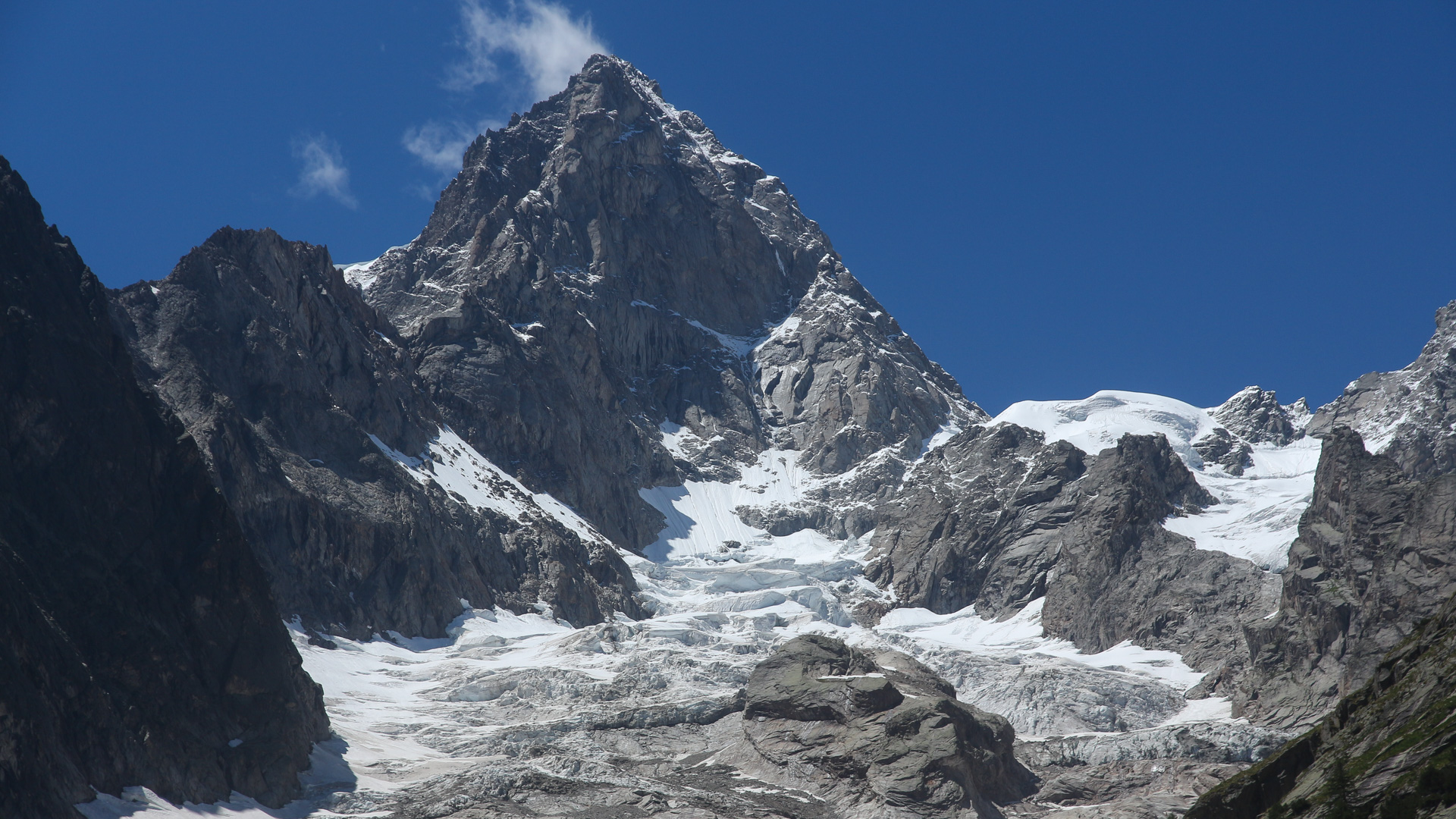 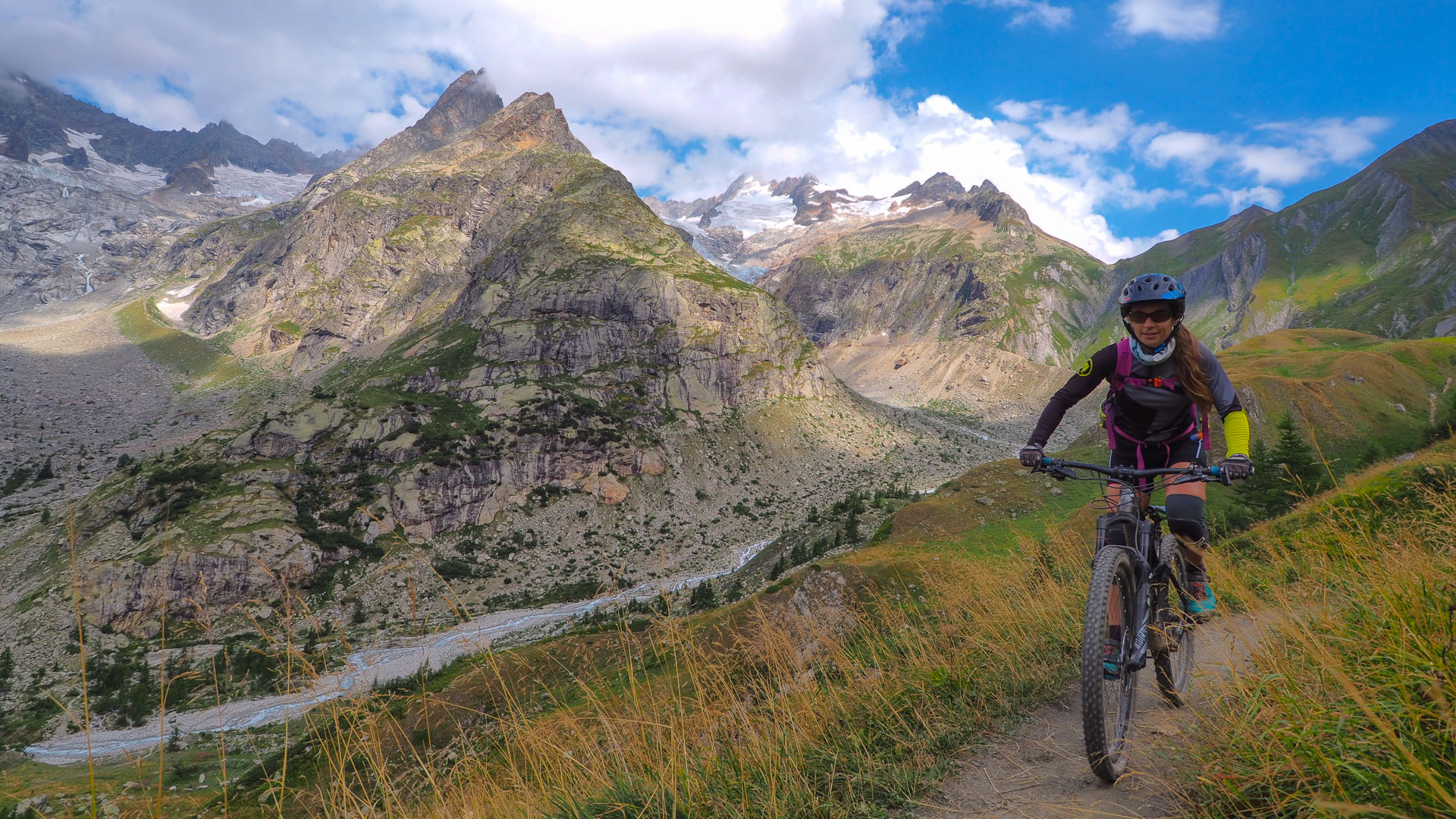 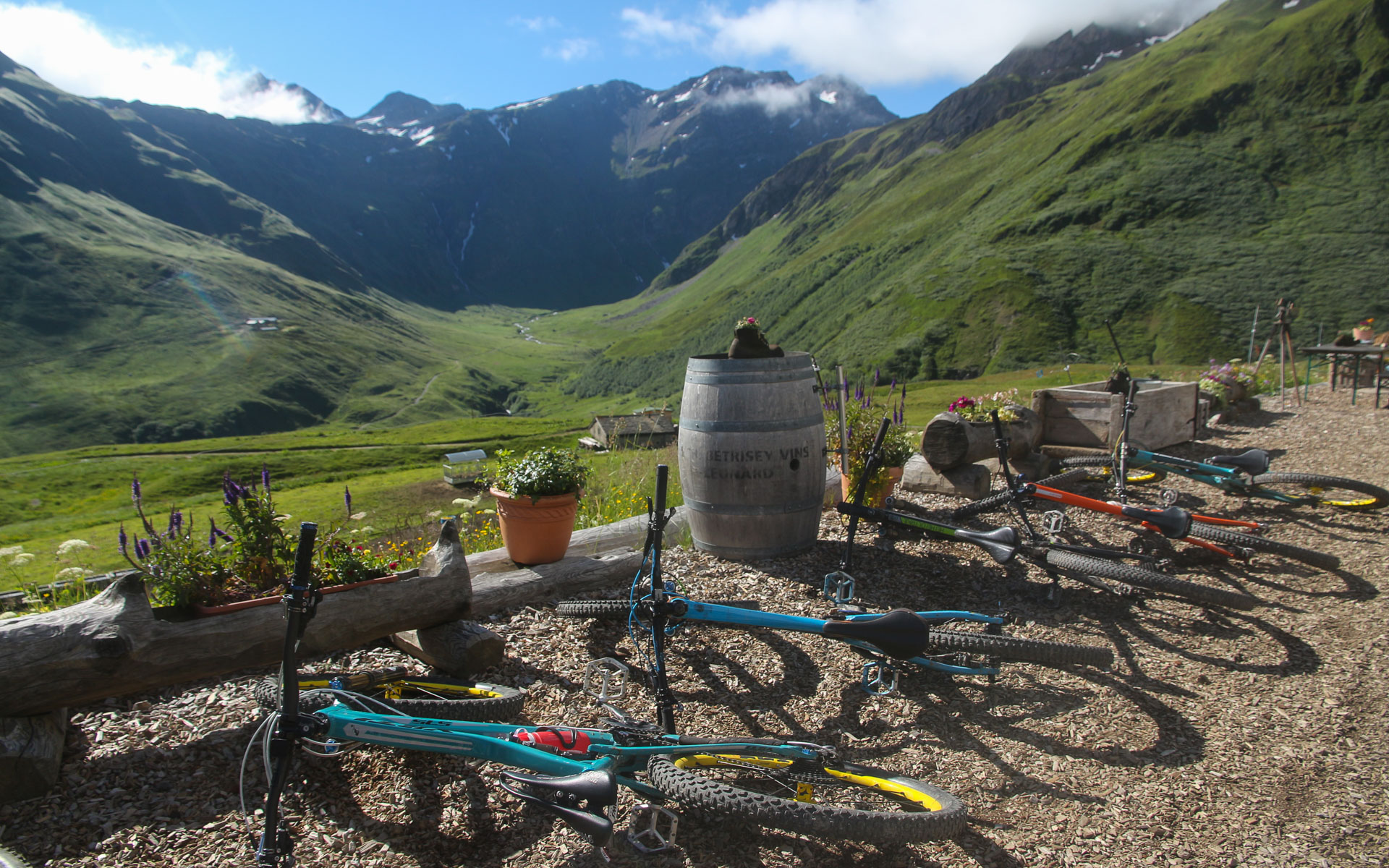 A magical enduro trip around the Mont Blanc, highest summit in Europe (4810 m). Make the most of the amazing singletrack on this tour without the demanding climbs, thanks to a clever mix of uplifts using vehicles and chairlifts. Starting in Chamonix and heading in a clockwise direction around this mythical summit we successively cross the French, Swiss and Italian borders. Our route takes us to the foot of mighty glaciers, over breathtaking cols, and of course along plenty of superb singletrack. We discover traditional villages and their wooden chalets, local farming life and the fabrication of the many different cheeses of the region. The Tour du Mont Blanc, simply one of the best mountain bike tours in the Alps!

Guided version: from 1355€ - DetailsSelf-guided version: from 1285€ - Details Duration : 6 days | Level : Customer satisfaction : - 1 reviews
+33 458 140 435 A dedicated team of travel specialists is available to offer you expert advice Monday to Friday from 9 to 12:30 AM and 13:30 to 6 PM (French time) on the phone, or by email.
Bookthis tour
In the event that there are official travel or mobility restrictions in France or in your country of origin at the booked tour dates (official travel warning, quarantine upon return, closed borders) which make it impossible for you to undertake the trip, we offer to defer your booking to a later date at no extra charge. If no suitable date can be found, we offer a full reimbursement.
Print Download PDF
Share
Share on Twitter
Share on Facebook
Share on Google+
Share by email
Physical level :   Technical level :

Itinerary start: France Bike Trips services begin on day 1 at 13h00 in Chamonix. On request we can book extra nights in Chamonix prior to the tour. Transfers from Geneva airport are also available on request.

We depart on our bikes from Chamonix, at the foot of the majestic Mont Blanc. We head deep into the valley which takes us to Tour Village, while passing by the foot of the moraine of the Argentiere glacier. From the balcony path in the forest, we see appear the massif of the Aiguilles Rouges, some 2,000 m higher up. From this standpoint, we still feel quite small..... Arrived at the hamlet of Tour, we take the Balme cable car which propels us up to Balme pass, some 1,200 m higher up. A short, but intense effort allows us to reach the little pass of Croix de Fer, which allows us a magnificent descent crossing the alpine pastures and then a forest full of larch and spruce trees.

Heading toward the Trient glacier by way of a small paved road that is unaccessible to cars. A short portage and, there you have it, we are at the foot of the impressive glacier. We then follow the running water and the "bisses", little irrigation canals which also transport ice (you will better understand when you see them!) We reach the Trient pass. The view opens up onto Martigny and the Rhone plains. Long descent into the valley by way of a small trail which passes by typical Swiss alpine chalets. We then start a long climb back up, alternating between paths and small roads with very little traffic up to Champex. The chalets look like pictures on postcards.....We pass along the shores of Champex's cute little lake and then a superb technical descent through forest to rejoin Val Ferret. We climb back up on a balcony path lined by the Dranse river banks. What beautiful views on the small rock tower of Clocher du Portalet. Arrival in La Fouly (1,600 m), a small resort at the foot of the Tour Noir and the Grande Lui.

Settle at the mountain hotel for a traditional meal and a good night sleep.

This morning, we go towards the hamlet of Ferret, while crossing the alpine pastures under the imposing mass of Mont Dolent. From Ferret, we climb  up a slope which allows us to rejoin the alpine pastures of Peule, summer residence of the famous queens of the Herens race (traditional black cows, very popular for fighting. From Peule, we follow the touring path of the Mont Blanc to rejoin Ferret pass which borders Switzerland and Italy, garded by the magnificent Niddle of Triolet. An demanding climb, but entirely feasible on mountain bike! And then the beautiful technical descent to Helena refuge, before to start a long, rolling descent onto Courmayeur. The ripped form of the myth-like Grandes Jorasses appears...

Narrow road, fireroad and single trail succeed one another to reach the longest portage of our trek which arrives at the Seigne pass (approximately 30 minutes of walk). Wondefull view on the glaciers the entire way up our climb... At our arrival, superb panorama onto the Aiguille de Tre la Tete and its sharp surroundings which make us forget our efforts... From La Seigne Pass, sumptuous downhill on single track onto Chapieux valley, and the glacier city, which named like  "l'Aiguille des Glaciers", the summit dominating it. We are at an altitude between summer alpine pastures and the rock and glaciers of the high mountains.

We climb to the Cornet of Roselend will be done by shuttle bus... The Tarines and Abondances cows, certified to make the famous  Beaufort cheese are not fare.

From Cormet, a technical traverse allows us to stay in the same altitude range amidst the alpine pastures before diving, by a technical path, into the Plan de la Laie valley. From here, we start the integral tour of Roseland Lake : we gain some altitude on an alpine path, take steep balcony path above the lake before following the banks of the lake to join the Roseland dam. We leave Roseland Lake and it's emerald waters to climb the short Sur Fretes pass from where appears the enchanting valley of La Gitte: alpine pastures, river torrents,  abrupt surrounding summits...

From our haven of peace, we start the ascension of La Gitte pass on a superb path with a multitude of switchbacks. We carry our bike shortly (or better, push our bike), and  we reach La Gitte pass: superb 360 degree panorama on the Alps:  Aravis, Beaufortain, Bauges and, of course, Mont Blanc massif. A magnificent single track downhill is waiting for us to join the Joly pass. A new, wonderful view on Mont Blanc... Descent on les Contamines while crossing the alpine pastures and the forest. Passage to a pretty roman bridge before taking  a bit of altitude in underbrush to reach another dreamy single track leading us to Contamines....beautiful paths alternating between the depths of the valley and the balconies await us before we reach the Contamines ski resort, nestle at the foot of the abrupt mountains and glaciers.

We reach Saint Gervais by following the valley of Bon Nant and it's multitude of traditional chalets. In Saint Gervais, we begin our last ascension of the week to go over our last obstacle, which will separate us from the valley of Chamonix. Another beautiful descent in underbrush which we savor until Houches. Passage in front of the Bossons glacier to rejoin Chamonix where we arrive in the beginning of the afternoon.

Itinerary end: The tour ends in Chamonix at around 15h00. On request we can book extra nights in Chamonix, or organise a transfer to Geneva airport.

Distance and altitude gain are an indication only and may vary.